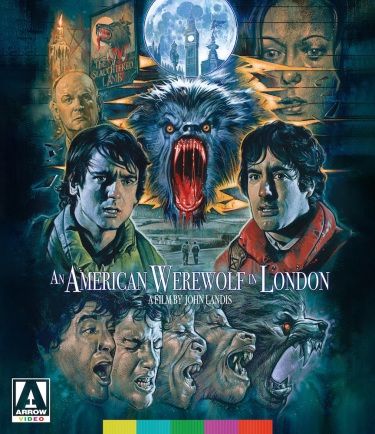 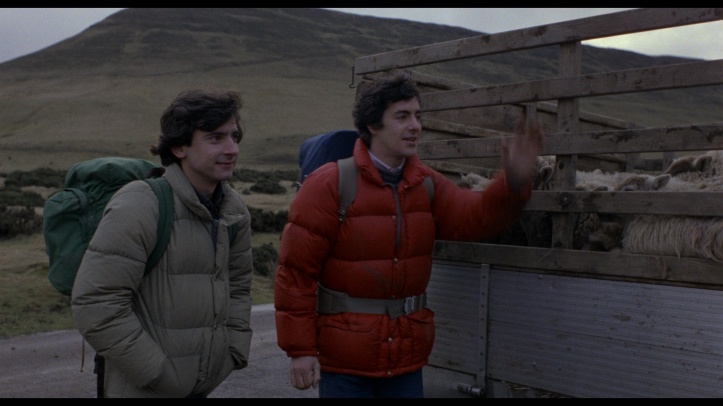 One of the greatest directors of the 1980s, John Landis (The Blues Brothers, Trading Places), expertly combines macabre horror with dark humor in the lycanthropic classic, An American Werewolf in London. American tourists David (David Naughton) and Jack (Griffin Dunne) are savaged by an unidentified vicious animal whilst hiking on the Yorkshire Moors. David awakes in a London hospital to find his friend dead and his life in disarray. Retiring to the home of a beautiful nurse (Jenny Agutter, Walkabout) to recuperate, he soon experiences disturbing changes to his mind and body, undergoing a full-moon transformation that will unleash terror on the streets of the capital… An American Werewolf in London had audiences howling with laughter and recoiling in terror upon its cinema release. Landis’ film has gone on to become one of the most important horror films of its decade, rightly lauded for its masterful set-pieces, uniquely unsettling atmosphere and Rick Bakers’ truly ground-breaking, Oscar-winning special makeup effects. Now restored in 4K, and presented with an abundance of extra features, this big beast of horror can be devoured as never before… 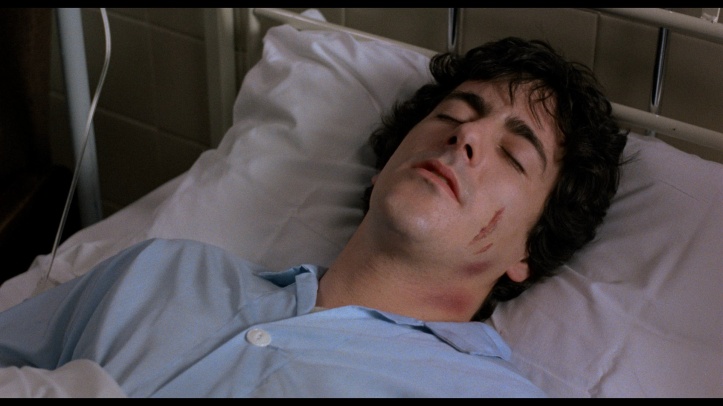 Let’s not get this twisted, I watch a LOT of movies. And in the ton of movies I see, there are bound to be a few that slip through the cracks from time to time on me. An American Werewolf in London from 1981 is one of those films. But from the moment I saw it for the first time a few short weeks ago, I knew I had to own it. As a result, I went out and got myself the Blu-ray of this classic and now that I did, I am very happy that I did. I’m not a guy that usually likes werewolf movies, but I can safely say that I LOVE this one. And if you have yet to see it yourself, I’m willing to bet you’d love it as well. Guys, this isn’t your typical wolf movie, not at all. And the fact that it’s different is what makes it so awesome. The film starts off simple enough. Two friends, David and Jack, are backpacking right along. All seems about as normal as they could be until the two run into a little bar outside London. As soon as they go in this bar the tension is clearly in the air, and it gets a lot worse when they start asking questions. Pretty soon they are back out at the mercy of their environment on a full moon ridden night. I think you can guess where this is going? 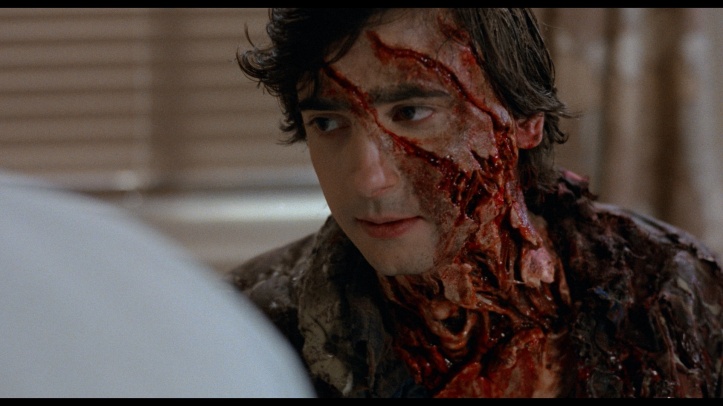 But the fun doesn’t start and stop with just a werewolf and what comes after. We have ghosts, we have gore-filled dream sequences, and we have some very cool and frightening visuals. And we have all of this on top of a love story, as one of our friends here ends up in the care and the loving arms of a very nice looking London nurse named, Alex. And all the while we get all of this rolled up into one epic package, the film never does lose it’s sense of humor. And it all makes the film that much more enjoyable as the film’s events start to all meet up at the end. I think it goes without saying that this film is a classic and one of the best films of the 80s. We have one of the most iconic things ever placed on film with the transformation of one of our characters to a werewolf. It’s stuff like that, that no amount of CGI in this day and age will ever duplicate or recapture the spirit of. This movie is fun, well written. well crafted, and it an utter enjoyment from it’s start to it’s finished. This is probably the best werewolf movie ever made, and if you haven’t seen it, then SEE IT! If you have seen some of the great stuff Arrow Video has been doing with such titles as The Hills Have Eyes 2, this is another great one! We have a great package with great extras both in the box and on the disc. It also looks better than it has ever looked and that’s coming from a guy who owned the other Blu-rays. 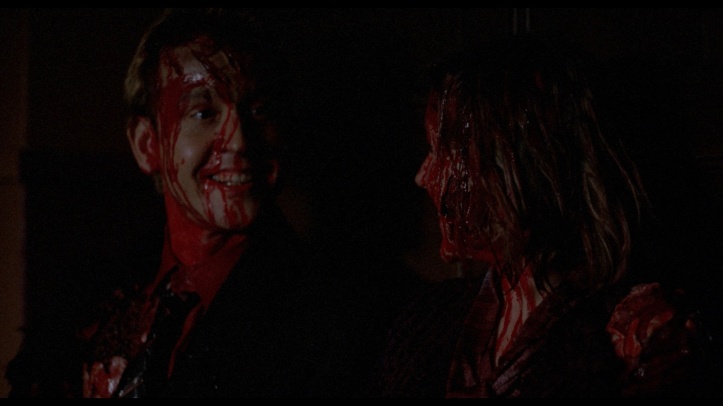 – New 2018 4K restoration from the original camera negative supervised by John Landis
– High Definition Blu-ray (1080p) presentation
– Original uncompressed 1.0 mono and optional 5.1 DTS-HD Master Audio
– Optional subtitles for the deaf and hard of hearing
– New audio commentary by Beware the Moon filmmaker Paul Davis
– Audio Commentary by actors David Naughton and Griffin Dunne
– Mark of The Beast: The Legacy of the Universal Werewolf, newly produced, feature-length documentary by filmmaker Daniel Griffith, featuring interviews with John Landis, David Naughton, Joe Dante and more
– An American Filmmaker in London, a newly filmed interview with John Landis in which he reflects on his time working in Britain and British cinema
– I Think He’s a Jew: The Werewolf’s Secret, new video essay by filmmaker Jon Spira (Elstree 1976) about how Landis’ film explores Jewish identity
– The Werewolf’s Call, Corin Hardy, director of The Nun, chats with writer Simon Ward about their formative experiences with Landis’ film
– Wares of the Wolf, new featurette in which SFX artist Dan Martin and Tim Lawes of The Prop Store look at some of the original costumes and special effects artifacts from the film
– Beware the Moon, Paul Davis’ acclaimed, feature-length exploration of Landis’ film which boasts extensive cast and crew interviews
– Making An American Werewolf in London, a short archival featurette on the film’s production
– An Interview with John Landis, a lengthy archival interview with the director about the film
– Makeup Artist Rick Baker on An American Werewolf in London, the legendary make-up artist discusses his work on the film
– I Walked with a Werewolf, an archival interview with the make-up artist about Universal horror and its legacy of Wolfman films
– Casting of the Hand, archival footage from Rick Baker’s workshop as they cast David Naughton’s hand
– Outtakes
– Original trailers, teasers and radio spots
– Extensive image gallery featuring over 200 stills, posters and other ephemera
– Reversible sleeve featuring original poster art and artwork by Graham Humphreys
– Double-sided fold-out poster
– Six double-sided, postcard-sized lobby card reproductions
– Limited 60-page booklet featuring new writing by Travis Crawford and Simon Ward, archival articles and original reviews